Can Fish Drown in Water? How Do Fish Get Oxygen?

Ask a child how many fish would remain if 6 fish out of 10 drowned and you might hear something like, “Fish can’t drown, silly!” But perhaps you shouldn’t just laugh off the answer. It’s easy to think that, because fish live in the water, that they don’t need oxygen to survive. The truth is that fish breathe oxygen just like humans.

So can fish drown? The answer is a little more complicated than you think.

If this idea boggles your mind, don’t worry. We’re going to investigate how fish can drown and answer questions like, “How do fish get oxygen?”

Although it is a pretty grim scenario, imagine this: You win a goldfish at the fair. The fish is awarded to you in a small plastic bag with equal parts water and air. Since you are having fun at the festival, you do not return home immediately. Unfortunately, about the time you do return home, your prize is belly up. What happened?

Your goldfish ended up running out of oxygen. The same thing can happen if you leave a fish in a bowl that is unfiltered or doesn’t have live plants.

But does this mean you fish drowned? Or did it suffocate? There is a subtle difference, and once you know it, you will understand how people drown in water and fish drown in air.

Technically speaking, drowning is when the lungs fill with fluid and cannot drawn in oxygen. However, since fish have gills, they shouldn’t do this. That is why when a fish is in water and runs out of oxygen, it is more like they are asphyxiating, or suffocating, rather than drowning.

Although humans and fish both need oxygen to breathe, fish have something that humans don’t. This special adaptation allows fish to draw the oxygen present in water into their bodies. That’s right, it’s gills. We will discuss gill systems in a moment. For now, let’s focus on why oxygen is important to fish. 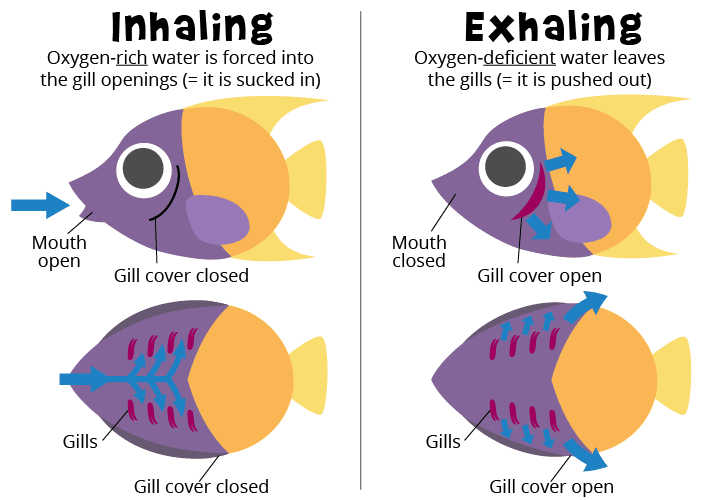 Fish have organs and muscles and bones that need oxygen to survive and function. All fish have a brain and a heart, bladders, stomachs, kidneys, intestines, livers, spleens, ovaries, and more. Fish might be physiologically different from humans, but they are biologically similar. The one thing they don’t have is lungs. Because of this oxygen feeds their bodies differently.

Now, switching to how fish breathe underwater with their gills. Gills vary between fish types and species:

For this reason, saltwater fish cannot be dumped into distilled water and expected to live. Also, you don’t want to go dropping a fish into a glass of milk either. The molecules present cannot be absorbed by the body, and they will drown.

As stated before, fish do not have lungs. Oxygen is pulled through the gills, which are composed of special epithelium cells. Arteries pump deoxygenated blood away from the heart towards the thin membranous tissue, where water moves across the surface to deposit oxygen. The oxygen present in the water is then absorbed by the epithelium and diffuses into the blood. At the same time, carbon dioxide produced by the respirations is released through the epithelium into the water.

Many fish types have four gills that are made up of interwoven columns of cells. Some fish will force water over their gills by widening the flaps of skin. Others open and close their mouths. Water rushes into the open mouth, and when they close their mouth, the water is trapped. Once oxygen is processed, the water is forced through the operculum.

Cartilaginous fish, like sharks and stingrays, have five gills on either side of their bodies. The gill slits have supported by an arch of cartilage, allowing them to stay open. Sharks usually need to force water into their gills, which is why they are continuously swimming forward to keep water flowing.

Fish do drown, in a way. When exposed to too much air, the epithelium cannot function properly, and the gills will stick together. Though it is more like suffocating, because they run out of oxygen, you can imagine that because there is no way for them to draw in a breath, it is also like drowning. You cannot draw in oxygen underwater, just like a fish cannot draw in air out of water.

But as mentioned before, the best terms to use are either asphyxiation or suffocation.

How Can Fish Suffocate In Water?

Suffocation can happen a number of ways for fish. Like people, fish take in oxygen and express CO2. This means that if a fish is present in a place where there is far more CO2 than there is oxygen, they will be unable to properly oxygenate themselves. When a person cannot breathe because of CO2, they pass out and eventually die. The same happens to fish.

Fish suffocate and die quickly without water following 3 to 4 minutes of no gill movement!

While the above scenario is not likely to happen in nature, unless considering climate change, pollutants, and algae destabilizing the ecosystem, you can see this happen frequently in fish tanks and even garden ponds. If the aquarium or pond is not being properly filtered, the water is going to grow stagnant, and the fish will not be able to breathe.

Also, oxygen dissolves into the water via floating plant roots and from the surface of the water in tanks of limited size. If you have a large tank, you are going to have to install a filtration system to keep the water oxygenated.

Another possible reason for suffocation is if the fish has deformed or injured gills. If gills are not working optimally, it means that the fish is not getting enough oxygen from the water. While they may stay alive for a decent amount of time, they will not have the same energy levels as the other uninjured fish, and they will become an easy target to predators or, they will suffocate. Furthermore, there are species of fish, such as sharks, that rely on forward motion to ventilate themselves. Fish that cannot swim forward, or those that cannot swim fast enough, will suffocate.

For example, if you pull a shark backwards towards the shore, they will not be able to breathe any more and will suffocate.

Overcrowding is another reason for asphyxiation. Imagine cramming a bunch of fish into a tiny aquarium. This is similar to people jam-packed into an elevator that suddenly malfunctions. Aside fro claustrophobia kicking in, people start feeling light-headed and nauseous, because the air is rapidly getting converted into CO2. In the case of an aquarium, even in the presence of a filter, too many fish will lead to too much CO2 and not enough oxygen. The weaker fish will start to die off, because there is not enough oxygen to support the population.

Next time someone asks you, “Can fish drown?” you have an answer. If we are being critical about terminology, then no, fish cannot truly drown. It’s only a figure of speech. A fish out of water is like a human in it, but the way the two die is different. Keep in mind that when you say a fish drowned, you are merely likening the experience of a human drowning in water to what a fish goes through when it is out of water. In reality, when a fish runs out of oxygen, they suffocate.

If you plan on setting up an aquarium or winning a goldfish at the next fair, be sure to remember that fish need oxygen just like people. Give them plenty of air so they can breathe, and you will have fish that are happy and healthy.

What are your thoughts on drowning fish? Do you have any other questions regarding this subject? Let us know in the comments or send us a message. 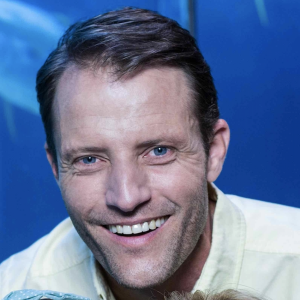 I love fish tanks and will share everything I learn through good research!

PrevPreviousHow Many Glofish in a 10 Gallon Tank?
NextHow Many Marimo Balls Per Gallon?Next

As an Amazon Associate I earn from qualifying purchases.